The Best Dressed Celebrities of 2021

Style is definitely a hallmark of fame, and everyone loves seeing a good fashion moment both on and off the red carpet. Even outside of their trade, celebrities can become household names simply by virtue of what they’re seen wearing when out and about, and we’re sure you can name a few celebrity fashion icons whose outfits you love to look at but whose career you might be less aware of.

From nights at the Venice Film Festival to days walking around the streets of California, wearing unique pieces can get celebrities into best-dressed lists for years to come and cultivate a following around the globe. We’ve compiled a list of some of our favourite British style icons and our favourite looks they’ve donned on the red carpet.

Which Celebrities Have the Best Fashion?

While British stars are certainly fashion icons in their own right, there are a ton of A-list celebrities and famous figures from around the globe who have helped bring designer names to international recognition, and who sport these pieces at all sorts of award shows.

Celebrities that make a name for themselves in the United States are also often seen as the tastemakers for global fashion such as Jennifer Lopez, Kendall Jenner, Alicia Keys, or Hailey Bieber to name only a handful.

Actresses who are celebrated for their work on screen also become fashion icons thanks to their award show appearances, with Margot Robbie, Laura Dern, and Tracee Ellis Ross being just a sample of perhaps unexpected style icons, but who constantly dress to the nines and turn heads on red carpets wherever they go.

What is Red Carpet Attire?

Red carpet attire refers to the outfits celebrities wear to high profile and often glamorous events, most notably movie premieres or award shows. The most notable examples that are treated as runways for the stars are the Academy Awards, BAFTAs, and the Emmy Awards, among others for actors and filmmakers, while places like the Brit Awards, American Music Awards, Billboard Music Awards, and others act as a stage for singers and songwriters to dress their best.

These events have become spaces where stars can wear the most elegant to the most risk-taking fashion choices and be seen around the world. Even places like Leicester Square have been home to iconic and much sought-after looks sported by some of our favourite actors and actresses. 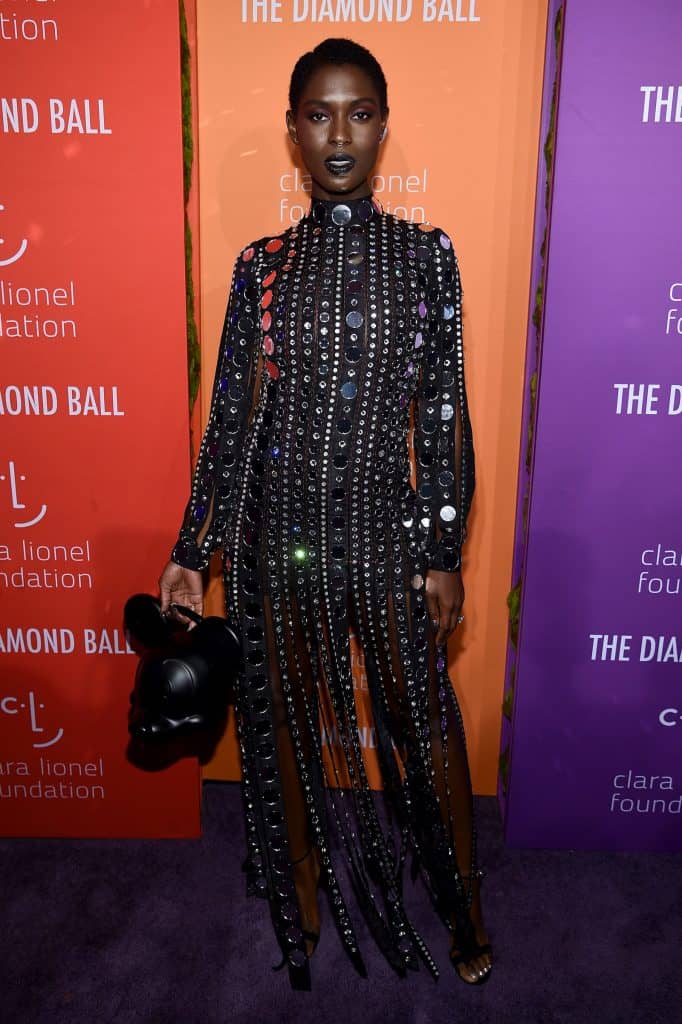 Jodie Turner-Smith has constantly brought her A-game to whatever event she attends. Every look she sports is daring and edgy while still bringing with it a hint of fun playfulness, with the actress often playing around with unique silhouettes that any other person would be afraid to even put on.

When it comes to designer looks, Turner-Smith is often spotted wearing Gucci, from a dazzling body-hugging mirrored dress for Rihanna’s fifth annual Diamond Ball in New York to a dreamy floor-sweeping silver dress that could have easily fit in Game of Thrones for the AFI Festival.

From crop tops to shiny jumpsuits, Turner-Smith carries everything she wears with an elegance that automatically cements her into the fashion hall of fame. 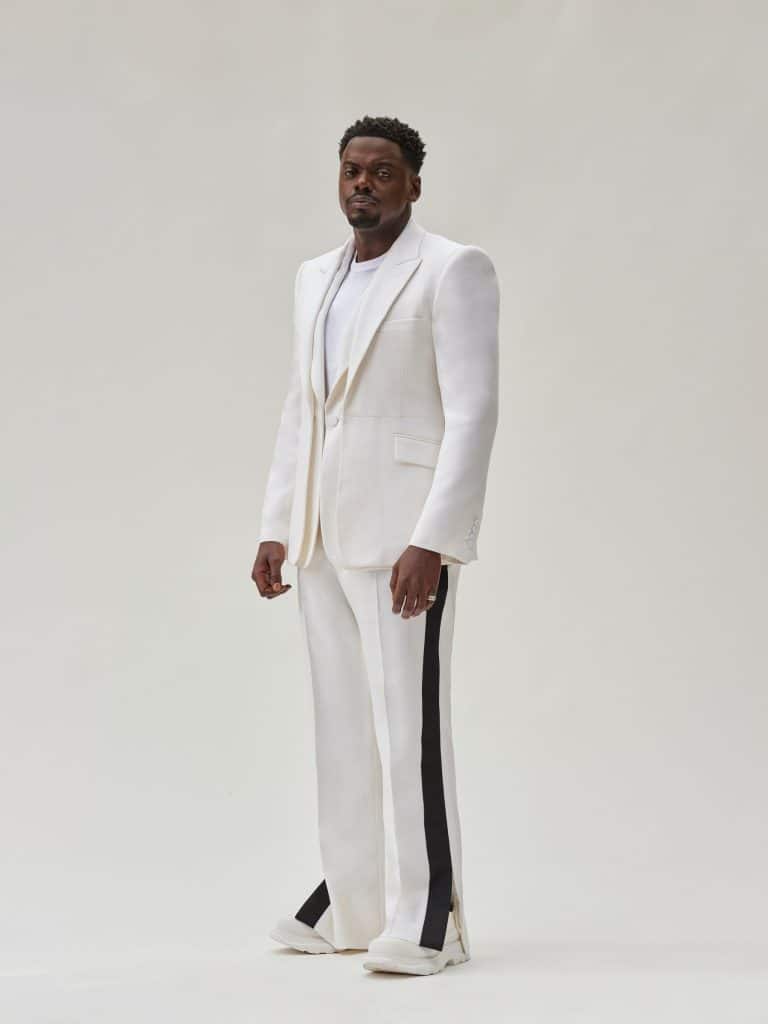 Daniel Kaluuya has been making waves in Hollywood since his breakthrough starring role in Get Out. And with all eyes on him, the actor has not disappointed whatsoever on the fashion front, serving looks right and left that every man wants to cop.

We absolutely adore the suits he’s worn on the red carpet, straying away from your typical black-tie look for purple silk Louis Vuitton pyjamas at the SAG Awards, a show-stopping white Alexander McQueen suit with a contrasting black stripe on the trousers, or when he wore a double-breasted Bottega Veneta suit for his Oscar win.

The actor wore several eye-catching pieces throughout his award show run and has had more than just a few articles written focused solely on his daring fashion choices, and it’s safe to say that that isn’t going to end any time soon. 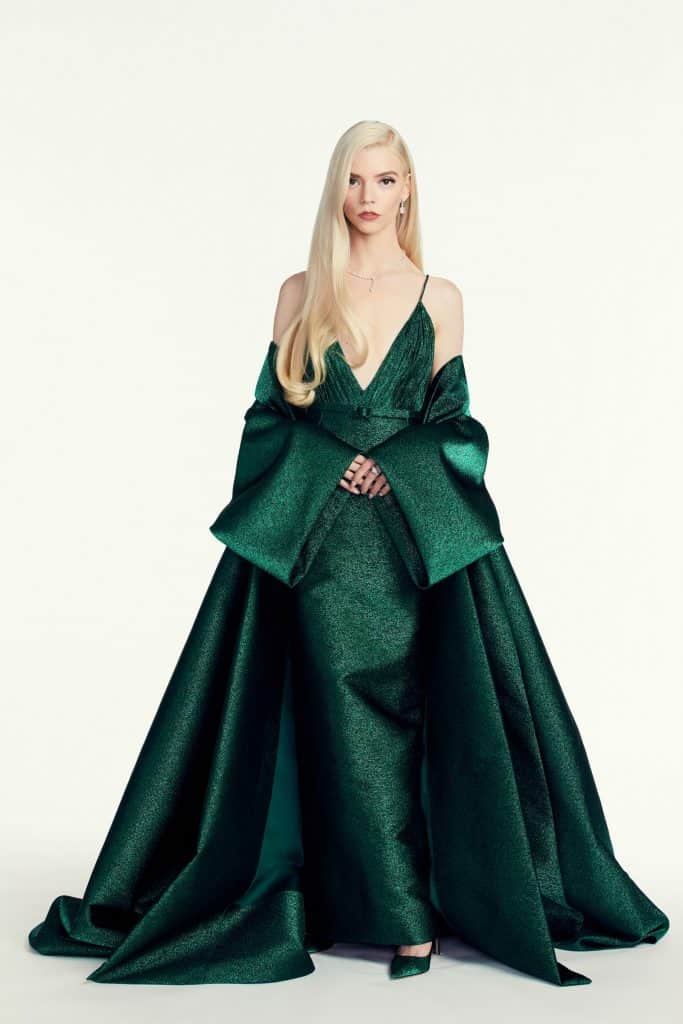 Anya Taylor-Joy has captured hearts around the world for her acting chops, good looks, and fantastic style choices. The actress, who has been on everyone’s style radar for a while, was the talk of the town when the photo of what she wore to the 2021 Golden Globes dropped on the internet.

While we definitely think that the sweeping custom-made green Christian Dior gown and her overall bombshell look were to-die-for, it is definitely just one of many standout outfits we’ve seen Taylor-Joy wearing that has caused us to gasp and stare in awe. 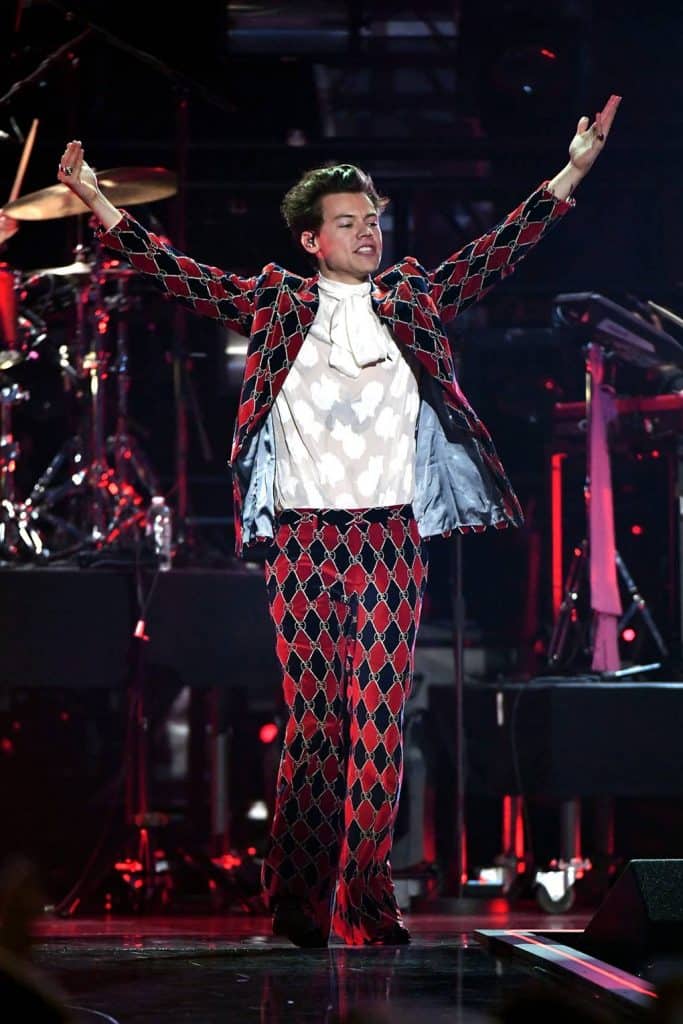 Undoubtedly, Harry Styles is considered to be one of today’s top male style icons and among the world’s best-dressed celebrities, and there really isn’t any question as to why that is. The singer wore a lot of striking and androgynous looks that many of us would be too afraid to wear ourselves within the past few years, bringing a lot of colour to otherwise black and white events.

There is quite a long list of outfit favourites from Styles, but definitely, some of our favourite looks were the many outfits the singer wore on his first solo tour in 2017, as these marked the shift in his brand and music since moving on from One Direction. Since then, Styles has partnered with Yves Saint Laurent, keeping a wardrobe full of custom Saint Laurent outfits that the world is obsessed with.

While he might not have been able to make it to the Billboard Music Awards this year to accept his award and we weren’t able to see an adventurous look on the singer, we’re excited to see him rock up to any upcoming music awards shows in the near future in looks we know will make headlines. 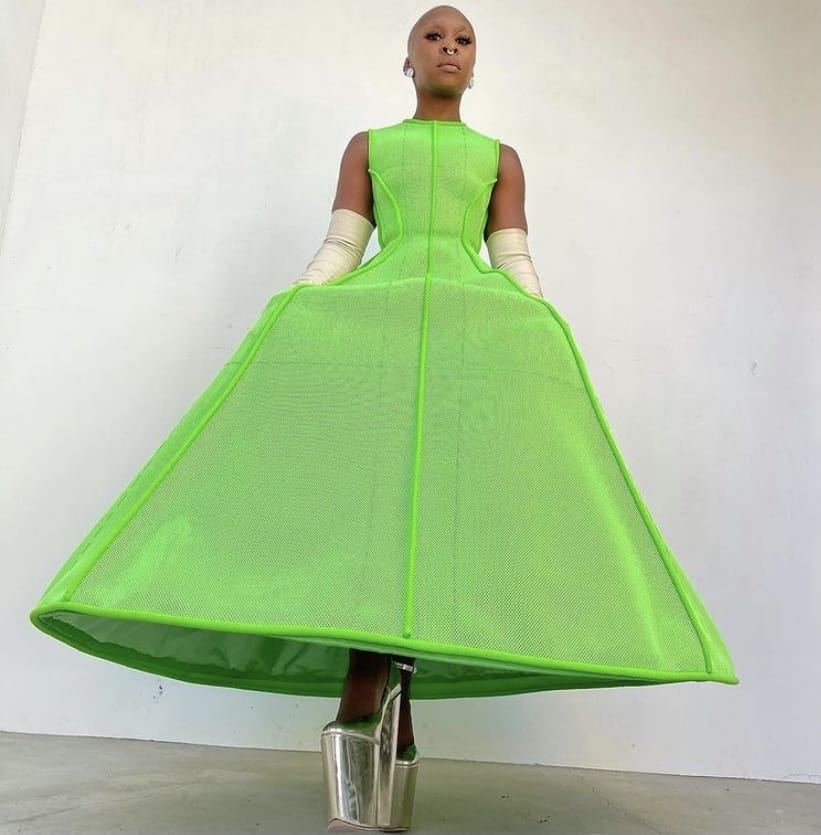 Actress and singer Cynthia Erivo has stolen the show many times over with her unique and risk-taking wardrobe. Erivo can go from wearing a simple and romantic black body-hugging dress enshrouded by a sprawling red shawl by Schiaparelli haute couture to a futuristic neon green Valentino dress with sharp angles for the Golden Globes.

We adore how the actress and singer wore pieces completely different from the last throughout the past few years, keeping the audience guessing as to what she could possibly be wearing next.

We think Erivo is a style icon not just because she isn’t afraid to go outlandish with her looks, but because these looks don’t define her red carpet style. While many people can be spotted wearing these looks, not everyone can truly carry them, which we think Cynthia Erivo does effortlessly. 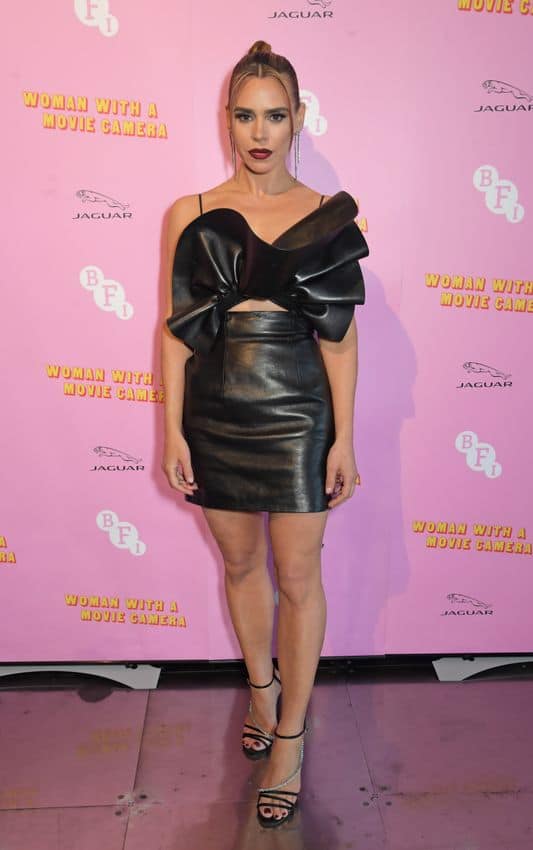 Billie Piper may not be on Hollywood’s radar just yet, but we think her style deserves a spot on this list of best-dressed celebrities for more reasons than one. The Rare Beasts director and star wore a lot of street clothing in the past several decades that never conformed to the fads of the day, often sporting grungier looks that still look good today.

Outside of her casual attire, Piper often wore stylish pieces to events that were bold and adventurous, something we definitely can’t say for a lot of other homegrown stars. Billie Piper has always been a fashion rule-breaker, but it was when promotions for Rare Beasts did her looks truly make the internet go ‘wow’.

Piper began sporting a new and more refined look at the promotional events and UK premiere of her directorial debut Rare Beasts, thanks in part to Rebecca Corrin-Murray who has dressed stars like Gemma Chan, Stacy Martin, and Florence Pugh.

At the various Rare Beasts events, Piper showed up in looks that caught everyone’s attention, from a statement leather crop top paired with a matching miniskirt to a shimmering silver dress that combined her signature grunge with A-list style. 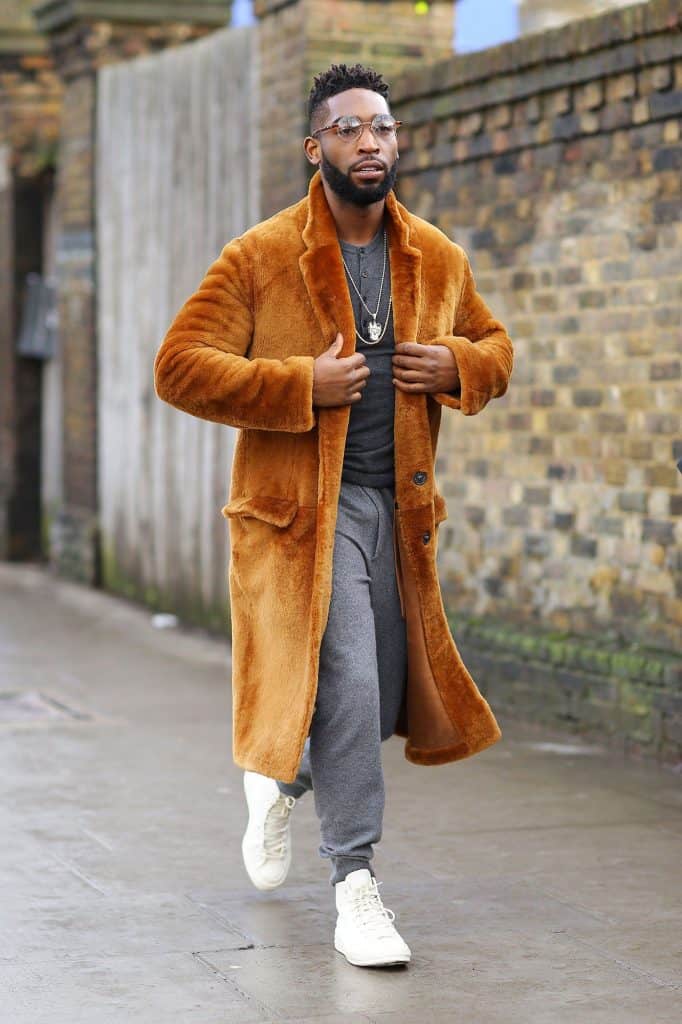 Tinie Tempah has donned many unique looks at different music awards shows throughout the years, never shying away from the fun and patterned looks that make an impact.

We’re especially into what the rapper wore at the 2016 MTV EMA Music Awards, a houndstooth Gucci tuxedo that made quite the statement and set him apart from everyone else.

Aside from this look and countless others that he’s sported, Tinie Tempah is a master of streetwear, combining structured with baggy and pops of colour into otherwise understated looks. His eye for style is greatly exemplified through his own contemporary fashion brand What We Wear. 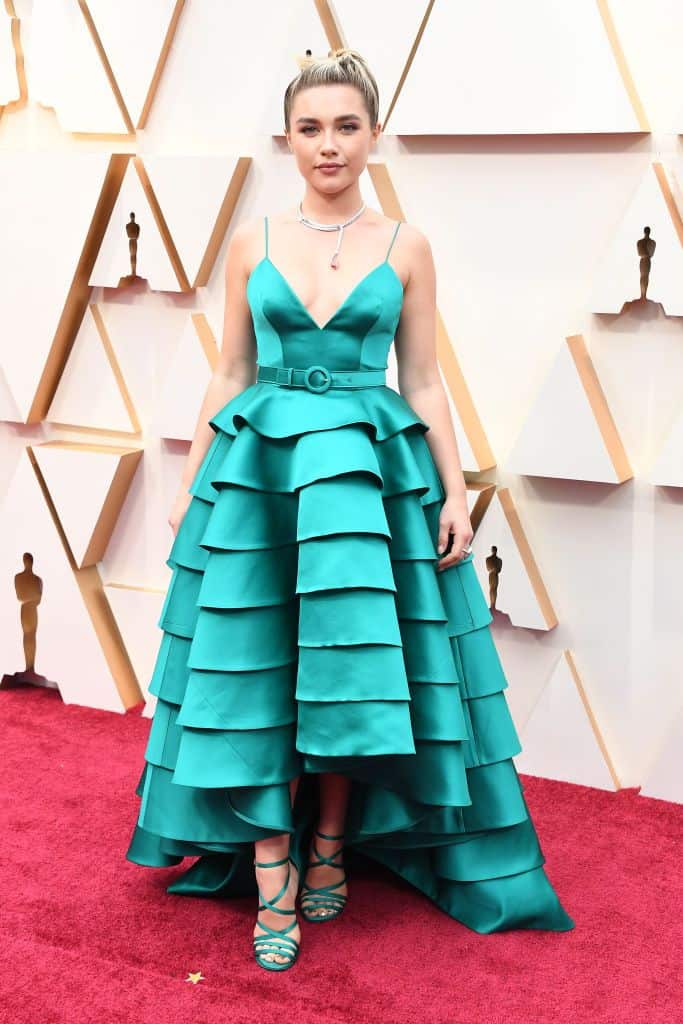 Florence Pugh has been one to watch for a while now, and we don’t just mean in terms of the screen. The Little Women star wore many jaw-dropping outfits on and off the red carpet these past few years, and we can barely count just how many looks of hers we want for ourselves.

On red carpets in the past awards season, Pugh wore one show-stopping dress after another, without having stepped out in something we’d even consider as lacklustre. Her style is a mix of classic and cutting edge, a fine line that she treads beautifully.

Out of all our favourite looks, perhaps it was her 2020 Oscars dress that really stole the show. The turquoise silk-satin Louis Vuitton dress was unlike anything we’d ever seen before, featuring a classic fit-and-flare shape cinched at the waist with a belt and finished off with a full and cascading skirt. This is certainly a look we can’t forget, so we’re looking forward to whatever else she has in store for us in the future.

There are so many celebrities out there that look good glammed up or walking about on the street, but not everyone can be a tastemaker or be millions of households’ highly anticipated red carpet appearance.

While there are a lot of other great fashionistas out there to keep an eye out for, we think these British personalities hardly miss and are continuously making waves wherever they go thanks to their style.

Which celebrity has the best street style?

When thinking of a male and female celebrity duo that inspires millions with their street style, we don’t have to look any further than David and Victoria Beckham. The power couple are each fashion influencers in their own right, collectively helping inspire UK and worldwide trends throughout the years.

Who is best dressed at the Oscars?

At the 2021 Oscars, a handful of Brits brought their fashion A-game. However, we think Daniel Kaluuya was definitely the best dressed one there.

Lucy Coleman is a freelance writer and fashion enthusiast hailing from Edinburgh. She discovered her knack for both style and writing while studying at university and decided to pursue her passions thereafter. When she’s not going through racks of clothing at different shops in her spare time, Lucy enjoys listening to music, writing stories at cafés, and catching up to her favourite shows on Netflix.

Previous Article
Beach Outfits: How to Dress Appropriately for the Beach
Next Article
5 Pop-Up Stores in London You Need to Visit